Publication of a legal article by Xavier Henry co-written with his Colleague Emmanuel Dieny in the Revue Lamy de la concurrence entitled “Refusal of approval of a selective distributor: the Court of Appeal of Paris in front of the limits of the antitrust law”(RLC 3572, No. 83 May 2019, p.13).

In a few months, the Court of Appeal of Paris has rendered several decisions about the refusal of approval by car manufacturers to candidates who wanted to become or remain authorized repairers (selective distribution). Under this astonishing concentration of decisions, the Court of Appeal had to rule on a question which had not been submitted to it for a long time, i.e. whether a refusal to contract was an agreement in the sense of Article 101 (1), TFEU and 420-1 of the French Commercial Code (antitrust law) or if it was an unilateral act. The Court replied that it was an agreement that could be an anti-competitive agreement in the event of an anti-competitive object or effect. This position, which applies to all selective distribution and not only to automobile distribution, is questionable regarding the principles. 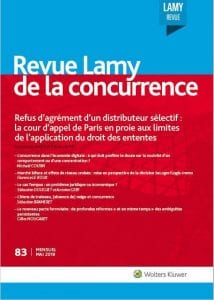