Publication in July 2018 of an article by Xavier Henry in the Quarterly Review of Commercial Law and Economic Law (RTDCom), Editions Dalloz, entitled “The ill-established case-law principles of Article L. 442-6, I, 5 ° of the commercial code ” (RTDCom, April-June 2018, p. 523).

If the merits of Article L. 442-6, I, 5 ° of the French Commercial Code which requires, before terminating an established commercial relationship, to give written notice to the co-contracting party, are not disputed, its application makes debate. The Commercial Chamber of the French Supreme Court (Cour de cassation) has made this text a special category of civil liability, asserting in particular its tort nature although the parties were bound by one or more contracts (written or not). Above all, it created a new principle in French law: compensation without proof of harm. The case law is often disconcerting, which increases the legal uncertainty for companies which have to deal with new rules that it was hardly possible to anticipate such as the questioning of the resolutive clauses. However, an application of well-known legal principles would not diminish the effectiveness of the text and would provide greater legal certainty. 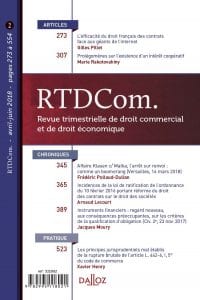