The modernization of the economy law dated 4 August 2008 added in Article L. 442-6, I, 2 ° of the French Commercial Code a new case of responsibility prohibiting the fact of “submit or attempt to submit a trading partner obligations creating a significant imbalance in the rights and obligations of the parties “. The legislator thus wanted to extend to commercial contracts the prohibition of unfair clauses previously reserved for contracts between consumers and professionals. If Article L. 442-6, I, 2 ° does not constitute the revolution expected by some and dreaded by others, it nonetheless poses a general principle that simplifies the challenge of clauses not only by the weak party of the relationship but also by the Minister of the Economy. Ten years after its adoption, an inventory of case law is needed, the text having obviously raised questions that have not all received a clear answer. 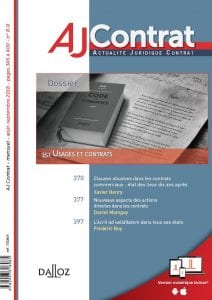 Xavier Henry and André Bricogne have been lawyers at the Paris Bar since 1992 and 1997 respectively. They have always been active in business law and especially in economic law. Having worked together in the same firm for some years, they have decided to continue their practice within their own business law structure (advice, litigation, training). With it, they can maintain a close and direct relationship with their clients and offer them a service that match their requests and needs in the firm’s areas of expertise of which they have perfect command.
Xavier Henry and André Bricogne are both AFEC’s members (French Association for Competition Study).